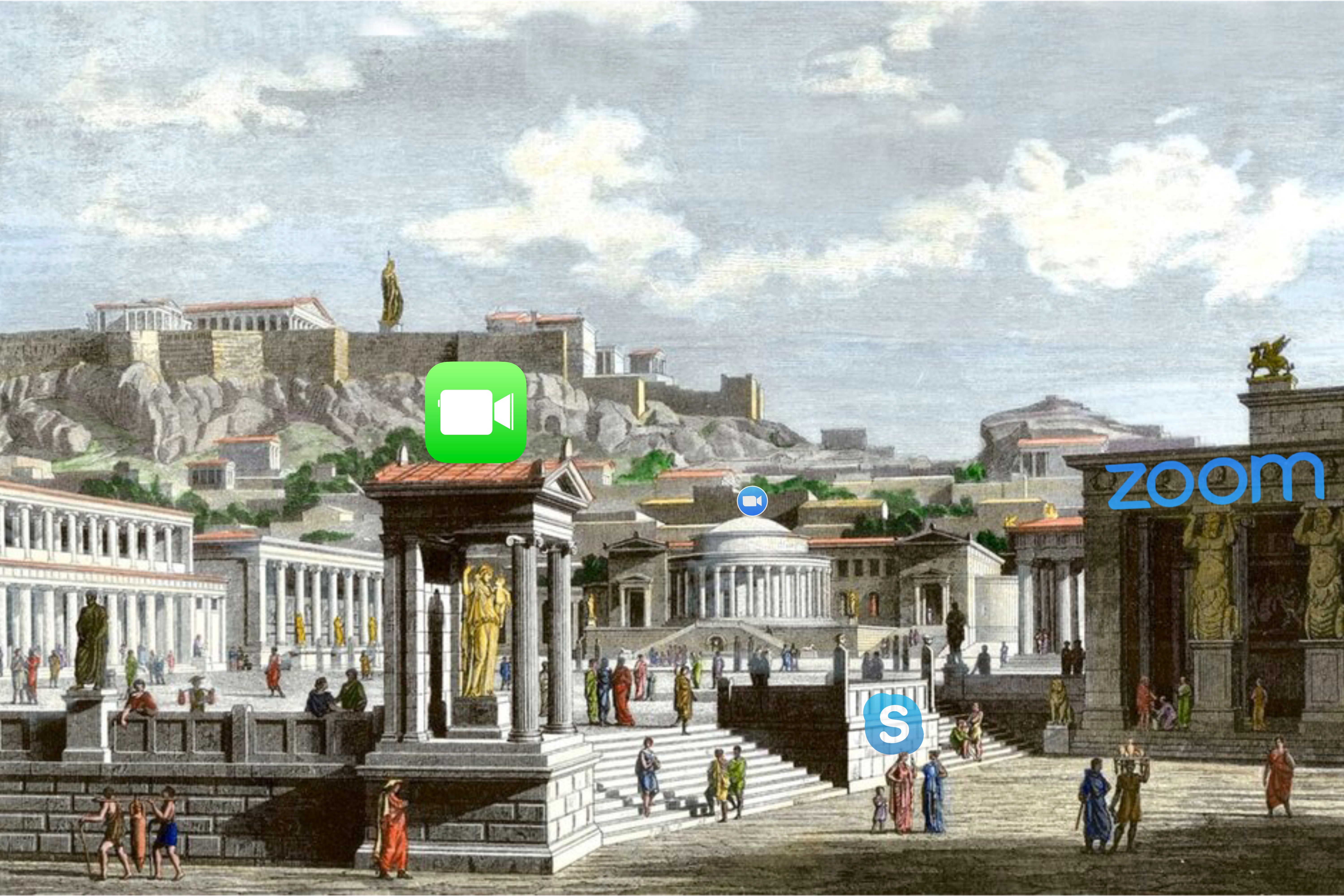 History of Meetings: From Agora to Zoom

Meetings are an integral part of work. According to the National Statistics Council, 37% of employee time is spent in meetings. However, 47% consider excessive meetings as a waste of time, so much so that they might go back in time to abolish the seed from which the idea sprung.

Exploring the origins of meetings, we can see the radical changes meetings have endured through (just like how you endure through meetings) to reach its current form. Hopefully, we can understand the ‘meeting’ to not be a necessary evil, but simply as necessary.

Before the word ‘meeting’ was invented in the 14th century, the ancient Greeks (8th-10th centuries BC) would gather in the Agora for statements of the king or council. The literal definition of the word Agora is ‘gathering place’. It has twin functions as a political and a commercial space. Merchants would sometimes sell their goods there, hence, it also served as a marketplace.

Famous philosophers such as Aristotle and Socrates are frequent attenders of the Agora. Topics like philosophy, business, politics, and even town gossip were discussed in those meetings. The first acts of democracy were also exercised there, by which the majority vote won. As the establishing place of democracy, ‘ecclesia’ was created - the principal assembly of the democracy in ancient Athens. This popular council established the agenda and met once a month.

Location mattered to the Greeks. There is even a building called an 'ekklesiasterion' built specifically to hold these supreme meetings. Meetings can also be held on the Pync and the Theater of Dionysus, but overall, the places are all very dedicated.

When the Roman Republic defeated the Greeks in 146 BC, they adapted the ‘Roman Forum’, a place for not only political and commercial use but also for religious rituals. The Forum was the center of everyday life in Rome; it has been deemed the most celebrated meeting place in world and of all history. The ‘Curia’ was a meeting place built inside the Forum for senate meetings. The speaking order was according to their seating arrangements, whereby the most powerful sat at the front.

The life of the Chinese emperor is one of many meetings. (This means, the modern office worker now has a privilege previously only granted to the political elite.) The emperor is obliged to attend meetings from the crack of dawn to discuss policies and matters of public interest. 'The hall of mental cultivation' was used for routine administrative affairs, where meetings with generals took place. In ancient China, as well as Greece and Italy, town squares were also common in holding meetings and public announcements.

The creation of town hall meetings can be dated back to the colonial era of the United States, where politicians gather to meet and discuss upcoming legislation or to debate and protest. The famous debates between Abraham Lincoln and Stephen Douglas sparked the common usage of these meetings for presidential campaign. Unlike the name, these meetings do not have to take place in the town hall but can be in places such as libraries, churches and schools. Town hall meetings are also frequent in Australia, Canada, and Japan.

By the 19th century, there is an increased demand for public gatherings to share academic information, due to the industrial revolution and the availability of formal education. San Francisco around that time consisted of people from many nationalities, and the chaotic meetings held inspired an American soldier, Henry Martyn Robert, to create the standard parliamentary procedure. The ‘Robert’s Rules of Order’ was created as a guidebook for conducting meetings, recognised as the ‘most widely used reference for meeting procedure and business ruled in the English-speaking world.’ It covers four main rules to a meeting:

There must be a moderator and an agenda to the meeting. The meeting opens with an address to everyone part of the discussion.

A motion, formal proposal on issues, can be made and discussed.

‘Seconding’ the motion from a member will propel the discussion forward.

After the essential steps mentioned, members would cast their votes by raising their right hand and saying ‘aye’ as yes, or ‘no’ to decline. Majority consent wins.

In the modern world, Robert’s Rules of Order is substituted into various organisations such as church communities, trade unions, law-making bodies, and of course, the corporate world.

The introduction of projectors and PowerPoints revolutionised the dynamics of meetings. They allowed for elements like images and data visualization to anchor discussion points. This leads us to current business meetings, where people gather to make decisions and discuss company objectives.

Although traditionally conducted in offices, meetings are now widely conducted in areas outside of the office, such as cafes and hotel lobbies for the work-at-home professionals. Unlike ancient times where meetings were held in one specific location, the modern era allows for flexibility in location.

Video conferencing added something new to meetings. It showed us the power of technology in sustaining normality in our lives despite disrupting circumstances. However, it also erases some of the rich history behind meetings of a dedicated system and place. Either way, we've seen that many in-person meeting traditions have started merging into the video dimension.

An Appreciation for Meetings

There seem to be a lot of negative press surrounding meetings. ‘Death by Meeting’, a book written by Patrick Lencioni of The Table Group, which aims to solve "the most painful problem in business", became the blueprint to conducting good meetings. A study conducted in the Harvard Business Review discovered that even just one executive meeting every week can pile up to 300,000 hours a year.  Business writer Dale Dauten wrote,

‘A meeting moves at the speed of the slowest mind in the room.’

Modern meetings are indeed often considered an ineffectual chore, even as we constantly try to search for ways to make them more goal-oriented and engaging. Regardless of the bad reputation, meetings are central to the progress of human civilisation. Meetings are where ideas advance, and where relationships are created.

So, perhaps when you start dreading your next meeting, remember how meetings have been essential to why modern life runs as smoothly as possible today.

Meetings have always been about the right place. BOOQED offers unique meeting places for booking in Hong Kong, Singapore, Shenzhen and Shanghai. From cafes to meeting rooms, we offer locations for you to make a good first impression. Try out the BOOQED app here: Download now (Android and iOS) 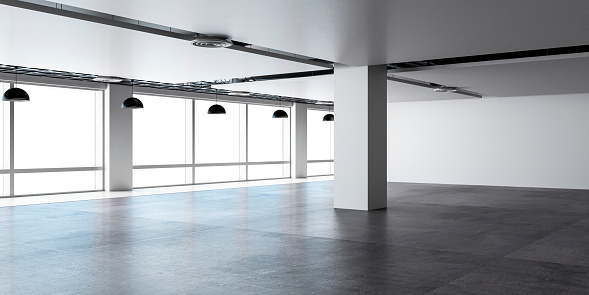 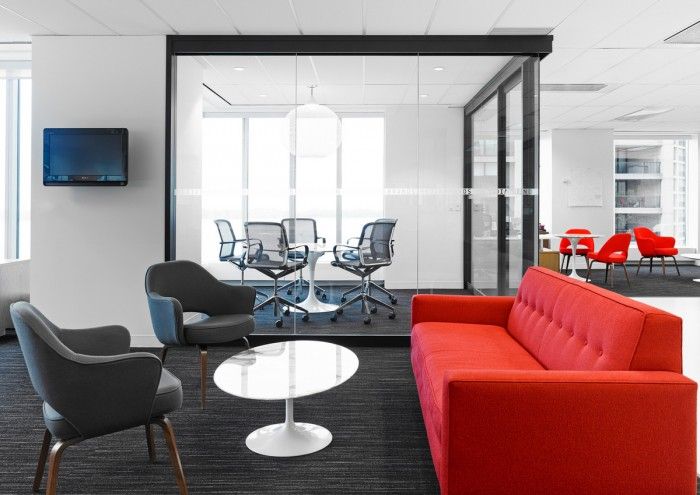